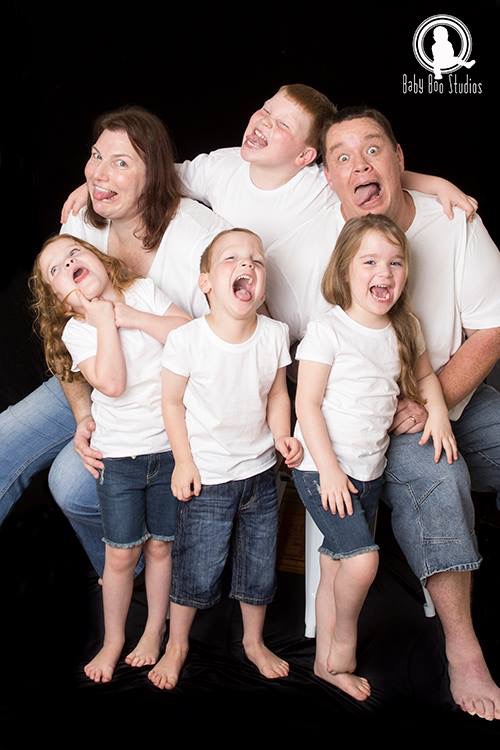 A couple of weeks ago, Caitlyn got ‘lost’ at a busy shopping centre.  We don’t normally ‘break formation’, and I am so conscious of all of us sticking together, so this was a first.  It was so busy, and she was just walking ahead of me.  Emma was lagging (“I only have little legs”) so I was with her, B and Hayden.  I saw her dress flicker around the corner, and then she was gone by the time I got there.  I mean gone.  I could not hear her, I could not see her.  It was horrible.  I felt sick, and the adjective anxious would be an understatement.

Police officers happened to be walking by.  They took in my face.  They then asked me a million questions.  For photos.  What she was wearing.  I found myself flailing at trying to describe Caitlyn to them.  Things like, “She will say her name is Cake-lyn as she has to have cake in her name” and “her hair is out because she refused to let me brush it so it is all messy” sounded so unreal as the words flowed out of my mouth.  “Does she have a favourite shop?” they asked.  She does – but there are too many too list.  She likes Build-a-bear because she can con her dad into getting her another one.  She likes Smiggle because there is SO much pink.  She likes the Croc shop because they have Ariel crocs.  I felt totally surreal.  It was so painful.  I set the timer on my phone, because I could not believe how slow time felt but also how fast it was going by.  5 minutes.  10 minutes.  15 minutes.  20 minutes – and they were going through the video footage of the area.  Security, management and the police were working to find her.  Reassuring me every step of the way.  A kind lady and her mother (whom I did not know) sat with my other three kids.  Jason was walking around trying to find her as well.  After 26 minutes, they found her.  She presented to the centre management office and said “Hello, Ali Moloney Ali Moloney Ali Moloney”  and that was all she would say.  That and Mummy over and over.  When they got the radio contact that they found her, I felt like I could breathe again.  I felt my chest unconstrict just a little.  She was way down the other end of the centre, and the staff started walking me towards her – with the police officers staying with the other kids.  I was shaking and too scared to even think about what could have happened.  When I got to her, Jase had already grabbed her.  She had two balloons from shops that she had snagged on her adventure.  She looked so scared, so little, and clearly she had been crying.  At that point, I could not stop from crying.  I was so relieved.  The staff were phenomenal, even offering to buy me a coffee so I could calm down a little!

When I look back and think about her nicking off, I am so thankful that I have talked to the kids about going up to a Police Officer and saying they are lost, or going to help desk.  It still freaks me out as I know it is likely to happen again one day; and I know I won’t remain calm.   Maybe then I will start getting grey hair from the stress of it!

The event left me feeling as though I had let my kids down.  As if I was not diligent enough in keeping her with me.  That in some way it was my fault.  Logically it was far from a blame laying circumstance.  It was a mis-adventure.  An accident of sorts.  But that *mother* in me likes to point a finger and say “well what were you doing that you could lose one kid?”.  I have said it before – I am my own harshest critic; and I really don’t know how this could have been avoided.  Breaking it down – she went around the corner, saw the lady dressed up as a fairy at one store giving out balloons, and then got distracted and just kept walking.  It could have happened to anyone, and I am sure that I have said that before to people when they have told me about similar things happening to them.

Another ‘thing’ I will take from the event – I often refer to my children as my kids.  I don’t always discern and say ‘my daughter’ or ‘my son’; and I don’t know why.  Possibly because of the three born at once thing – I actually often avoid saying the word triplets, to escape questioning, and also the questions that don’t come about Hayden.  When the staff were asking about my daughter, I had to think, oh yes, I have 2 daughters.  It seemed weird saying it like that, and I don’t know why.  I am a mum.  But I don’t always attribute being a mum to having sons & daughters, just kids.  Semantics I know.  But it was one of those ‘moments’ where I had to think because they were talking about my Caitlyn.  Or Cakelyn as she likes to be called.

After all of this, we were now running late for some photos with the amazing Kate from Baby Boo Studios.  We got to her house (and she is an old friend) and I was re-visiting the story.  We go inside.  Talk for a bit.  Then I realise that Emma is missing.  We have left her in the car.  Talk about a bad day, in the name of motherhood!  I go back out and get Emma – she is in the car (obviously) and crying.  She says “Why did you leave me in the car, I am the good one?”.  Oh my goodness.  I have completely sucked today at this motherhood thing.  Preoccupied with the feeling of relief and disbelief that Caitlyn had done the runner, that I actually for the first time ever, left a kid in the car as well!  After photos, we had some awesome cake, and Emma got just a slightly larger piece – mother’s guilt.

Now I see shopping centres as places where you really can lose your kid, and 26 minutes can feel like forever.  This photo, taken at Kate’s; is always going to be a reminder to me about losing Caitlyn!