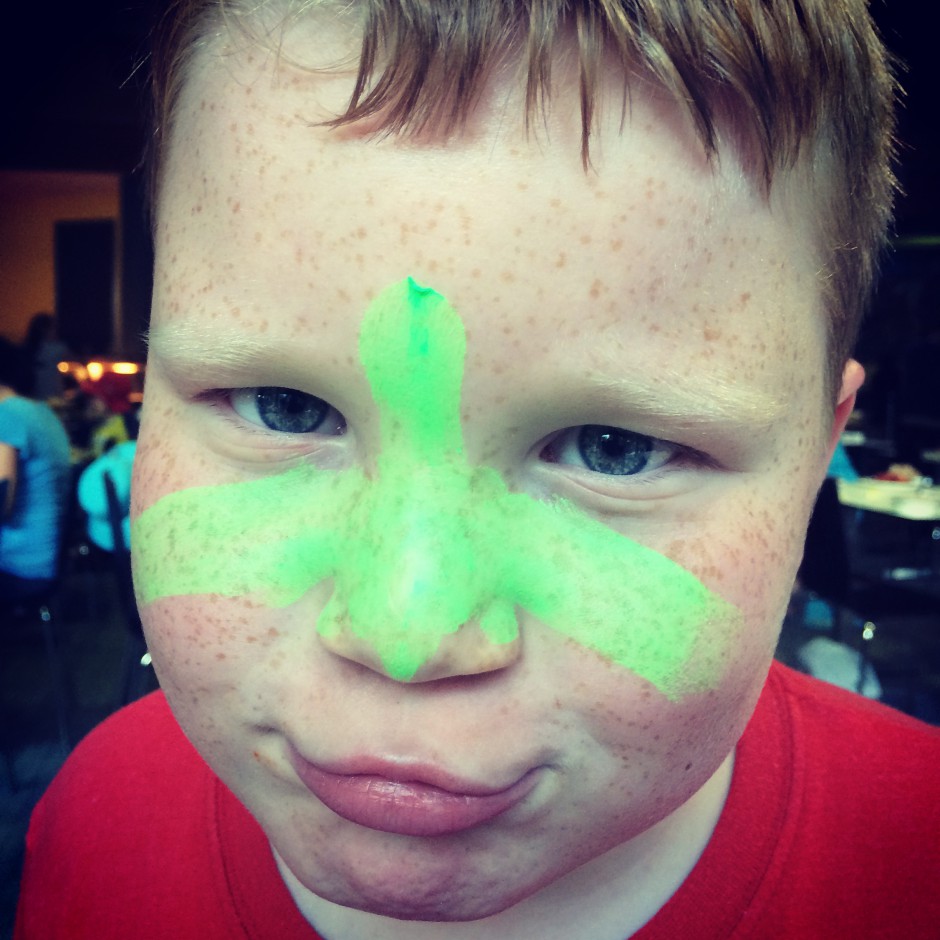 Last year, Hayden was bullied at school.  On and off, and often with no real reason why, and with varying levels of bullying antics.  Hayden was understandably upset.  Hayden had questions – “why do kids be this mean?”, “why do they think I am stupid/fat/ugly/waste of space/nerd/geek/dumb?”.  Thing is, I don’t know.  I don’t understand why kids are that mean.  I don’t know what they get out of it.

I do know that for a few months, Hayden was really sad about school.  He was a kid who ran out the door to the car every day to go to school, but for almost all of term 2 he was not at all keen to go.  There were a few ‘sick’ calls from the school – where he was going there because he felt sick in the stomach from being picked on, or just the fear of it happening in class again.  We spoke to his teacher and we were assured it was being ‘handled’ at the school appropriately.  Hayden was punched, slapped, pinched and then there were the verbal taunts.  Hayden says the verbal ones were more upsetting because, and these are his words, ‘it means they have thought about what to say to hurt you, but when they hit you, it is just random sometimes’.  So he is 7, and looking for meaning.

I was so saddened by his insight and the fact that he had to have an insight.  I knew bullying would eventually happen – because it happens to everyone right?  We don’t live in a perfect world.  It happens in workplaces, it happens in social settings, it happens on the internet.  We live in a society with bullies – who do it because they can, and sadly because they like it.

I am far from a perfect mum, but I do have a good relationship with my kids.  They do talk to me.  They may not in another ten years, but for now, they do.  Hayden did tell me this as it was occurring, for which I am thankful.  Numerous conversations with the school and we were assured that the child that was hitting (yes hitting) had been expelled and was not returning to school.  So clearly he had been doing this to other kids as well.  WHAT where his parents thinking?  That still makes me wonder.

What kept going though, was verbal taunting.  Hayden was told by a grade 6 kid, bear in mind, when you are in grade 2, a grade 6’er is like a god – ‘ you are so stupid you should just die’; or ‘you are so ugly, why would you wear your face like that?’.  I bet, as you read this, you laugh, or think, yeah that’s kind of funny.  But if someone said it to you, you are an adult and can bounce stuff like this off – but a 7 year old.  Woah.  What is he expected to say back in his repertoire?  I talked to Hayden a great deal about this, and other comments.  I decided right then that I was not armed with enough unbiased assistance and that I needed to get him to talk to someone that knew more about bullying than I did.  So I took Hayden to a psychologist.  Best move ever.  She was amazing.  The first session was like wearing your heart on the outside of your body and everything hurt.  The wind blowing, the dust settling, it all hurt.  Because I felt as though I was unable to protect my child.

But after his initial session, he was happy to go and talk to her, about all sorts of things.  Turns out he was really upset still about our cat dying.  And the fact that Jason works away from home and is not here much at all.  And school.  He was (and these are his words) ‘sad about kids that pick on other kids, not just me, but other kids too, because we have to watch all sorts of things when we play so we don’t get caught surprised by them’.  So what he means is, they play on guard.  They play with eyes everywhere to make sure they are not going to get their lunch box smashed, punched or just verbal abuse.

Hayden worked out a plan (and a really cool one too!).  It is the ‘five steps to beating bullies and he drew it out on a tracing of his hand.  This was huge for him, because Hayden has had all sorts of issues with fine motor skills and hand writing.  Colouring in and handwriting/drawing, are not his strong points, and he actually got picked on a bit for this as well – which is so frustrating when I know how hard he has been working on them.  Anyway, I digress.  He had five steps to managing bullies –

4.  Walk away, and go and tell a teacher

I was pretty impressed.  He obviously had put a great deal of thought into this.  We talked about his plan to his teacher who seemed to, in my opinion, brush it off.  I didn’t feel, at this time, that she was really concerned or looking to ensure not just Hayden’s, but all kids safety.  Because ultimately, when kids are at school, you are entrusting your child’s safety and welfare to the teachers.

Term III came and went, and by all reports, from Hayden and his school, he was managing and doing great.  His academic work was out of sight, and he was having fun again.  If I discussed bullying with him, he would say – ‘sure Mum, some times kids are jerks, but it’s ok, they all can do it, and I am fine, I am not sad, and my friends are funny and play with me heaps’.  This was not only reassuring to hear, but heart warming.  My little monkey biscuit had worked out (sad but true) that no matter what, no matter who you are, there is always going to be some push/shove – be it verbal or physical.  But it was how it was said or done, or how often that could make or break you.

Then in the second last week of school, someone urinated on Hayden’s uniform.  You can read about it here.  I was livid, but I was so sad as well.  Hayden was amazing.  He went back to school, stood taller and walked with pride back into his class.  I know that parents have a tendency to rant endlessly about how great their kids are.  I have four, so I think I rant less about each kid so as to share/quarter the love! But truly, he has shown insight beyond his years.  It took him a few days to ‘work it all out’ (his words), but he wanted to go back to school.  He thought about why it happened, could come up with no real answers why, and instead of playing a victim, he wanted to go back to school to see his friends.  While I can never ever downplay just how disgusting it was to have him come home with a bag full of urine soaked clothing that he had to fetch barehanded, I can feel some relief that he is made of stronger stuff.  I will never ever condone the behaviour, nor will I be happy with the way it was handled – but I am amazed at how my son handled it.  It was his situation to handle in many respects, it was my role to make sure he was supported and safe.

What he has learned is resilience.  He has learned that there are going to be situations in life that can make you feel humiliated, sad, mad, or just plain upset.  But he has learned that you have to get up.  You have to stand taller, walk prouder, and be yourself.  Because that is what we fight every day to be.  Each day, we wonder should we share a bit more of ourselves with someone, or should we tell our friends that one thing that is bugging us, or just keep it quiet as it will make us look bad.  All those bits of self doubt that cycle through our heads, that is what makes us unique.  That is what makes it worth standing taller for.  I think my little fella has metamorphosed into a butterfly – and while his wings might not be perfect, he is perfect for this world.  A mix of self doubt, knowledge, random Harry Potter facts and all things dinosaurs, this kid will go far.