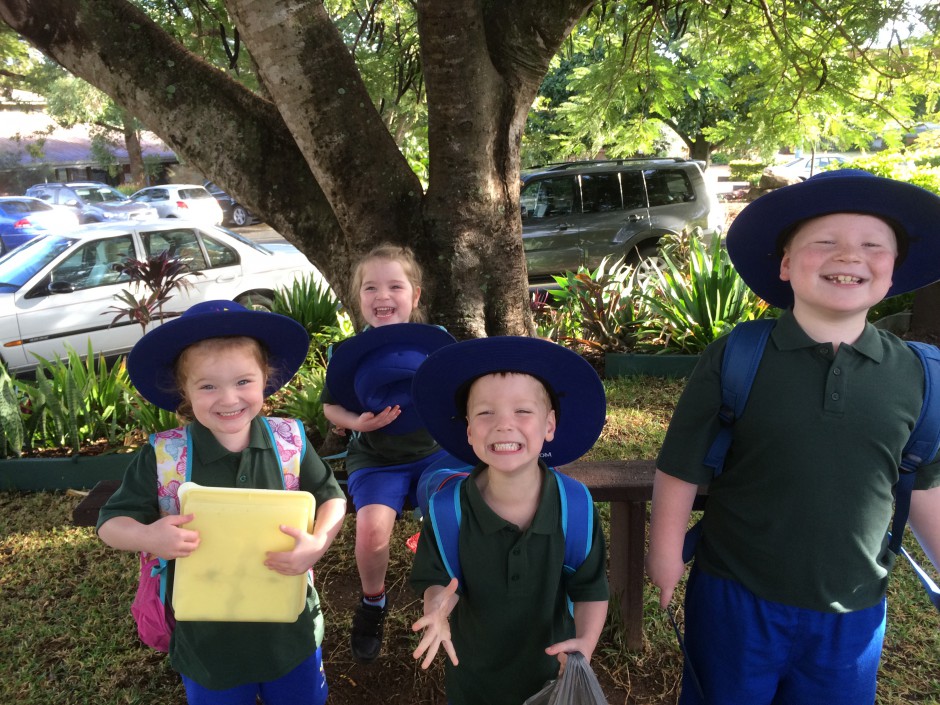 This not an adequate description of parenting. It is NOT all sunshine, rainbows, and happy times! It certainly has a good dusting of these, but these are the good bits. It is predominantly made up of tears, frustration, teamwork, routine, sleeplessness, more tears and arguments and negotiations. It is like working on a negotiation then to have to start all over again because the goal posts have shifted. It is like being outnumbered every day. It is a regime; dictated by four tiny humans that constantly amaze me with how intelligent they are.

It is about constantly feeling as though you are behind, or forgetting something, or having to change something again because kid A/B/C/D has done _______ or is ________. It is a whole world of possibilities that are governed by the insight and intellect of four tiny humans who know how to play their cards. It is about never sleeping soundly again because you have to ward off boogeymen, scary nighttime ninjas, ghosties and well, just about anything. We have even had sightings of dementors here – true story. It is about trying to explain everything that occurs in this world to the young keen minds – even the bad stuff. “Mum; why do people do that to each other?” – on the shooting that occurred the other day in the US. I don’t know how to answer it thoroughly because quite honestly, I don’t understand that level of malevolence or hate. Still can’t – even though I have seen much more than I have ever wanted to in my job.

Don’t get me wrong, parenting is rewarding. And I would choose to do it again should I ever get the chance to re-live my life. It is just so bloody tough. I think I have lost sight of who I am – because I don’t identify as much more than a Mother/parent and don’t see that changing for a very long time. I don’t know what my favourite dinner is because; well it is all about hidden vegies and kid friendly meals here. I don’t know what it is like to not bake things without having to think of four jobs in each item of cooking so that there are not arguments over ‘s/he did more than me’; or heaven forbid that s/he got a beater or spoon with ‘more mix on it’. I consciously divide everything into quarters, I can tell you off the top of my head which grocery items split well into four. It is a constant flurry of trying to meet the needs of four kids, and then the addition of responsibilities of employment – it is a busy place my consciousness!

Sometimes I catch myself – long after the kids have gone to bed, having a quiet cup of tea. Then I get an overwhelming sense of dread – have I forgotten something? Have I done everything? Usually I have, but I find I am constantly in a state of overdrive that when I do actually calm down a little I worry I am missing heaps of things! I wonder when things will slow down. I try to remember what life was like pre-children; or even pre-triplets. There are still the same number of hours in every day, but they are all filled – completely! I guess it is all relative. I mean, I don’t know what it is like not to have four kids now – five years into 4 kids and I don’t think I can imagine what I would be doing if it were one sibling for Hayden instead of three. Not that I would ever change it – but I always get asked ‘how do you manage/do it/handle triplets?’ It is totally relative – because I just don’t know how else I would be doing ‘this’! I think back to the crazy three hour feeds for three little newborns. Then the teething, then the game changers – walking and talking and free will. And it all just keeps on getting busier but with different aspects. I guess I am waiting for the time that I can trust them to not be supervised at home for periods of time; because maybe, just maybe, I might be able to take off my ‘Mum” hat and just be Ali. A time where they won’t draw on the walls, or pull the slats of their beds up and make a bridge walk through their room. Or steal food. Or just generally create something that is totally wacky and usually destructive in some crazy kids way. But along with their ability to be independent comes more work – washing, cooking, cleaning, homework, life lessons, and just trying to show and teach them how to be kind, considerate and polite humans. Seriously – there is so much that you are responsible for. Having to quell that inner bogan when someone cuts you off while driving; always having to ensure that your response to anything is PG rated – always being aware that you are a parent and as such are on display – because trust me, those little eyes, despite never being able to find their shoes, see everything that you do!

This is the toughest job I have ever had to do in my life; and while it sucks a great deal on a daily basis, I would not change it. I have found depths in my character that I did not know existed. I have been so strong and held it together when I have seen one of my children bullied, I have loved so deeply and immensely that I thought I might burst, and I have laughed so hard that I have forgotten why I was actually laughing. I have seen traits of myself start to come out in my kids, from little shy smiles to a deep love of history, reading and humanity. I have been so proud of them all that I thought it were not possible to be any prouder, only to find that yes, yes you can be. I have had moments of great triumph – watching them try their hardest, giving it their all – and still coming dead last, and moments of heartbreak.

They change you, these tiny humans. While you might lose yourself in the motherhood thing, you never actually get lost. They find you, wherever you may be, and I mean wherever – and you find that without them you are lonely and it is too quiet; and with them you just want five minutes peace and quiet. They are part of everything I do, and it is so difficult to imagine a life where that was not that case. So while I am busy and disgustingly out of date and out of touch – I am doing the best I can to get at least one rainbow and sunshine-y moment every day. Because those moments, while they last only a little while, are something I remember and hold onto for a very long time. That shy smile when they saw that you came to watch their dance, that little hand raised up to meet yours and hold it, that big big hug right before bed time, those are just some of the moments that make it all worthwhile. The being lost in motherhood thing – the being lost in the crazy world of tiny humans controlling your every movement. It won’t last forever, and it won’t be the same tomorrow.