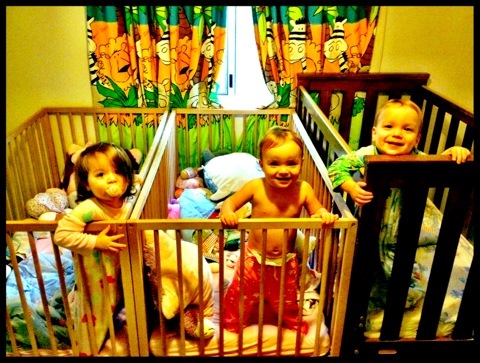 Another Saturday, another day of lovely sunshine 🙂

It struck me today that I can pretty much evenly third just about anything now!! How many mandarin sections, biscuits, bananas you name it!! The poor little buggers are going to grow up feeling as though they always ‘only’ ever got a third of anything!!!

Let’s just say its far from their detriment!! They certainly don’t look neglected!

Today we visited the library (where Emma set off the fire alarm…) an indoor play centre and then groceries.

The indoor play centre was nightmarish. Not our first visit there but certainly our last. I had to pay an entry fee (yes I am an adult!!) and the kids were $10 each! It was a tad excessive that I had to pay I think! Thought we could have lunch there as a treat – Hayden had a rough week adjusting to school again and the rule of thirds thing – he doesn’t get mummy all to himself all the time…so, ordered lunch at 1140 (routine wench that I am dictates lunch is served at midday!) and it arrives (after struggling to get three high chairs to the table) 45 mins later! Meanwhile I have four hungry kids, three who are particularly vocal about it!!!

Long story short, the play centre was awash with kids unsupervised (talking babies here!) who were biting my kids! As a mother of a biter (Miss Caitlyn) I am very observant of her interactions! Incredibly frustrating to see kids kicking or walking on other kids with no repercussions and parent/s sitting and drinking coffee!!

So, off we go to get boring old groceries – ride for kids (wiggles with Sam on it which is the only reason Hayden would get on it) only has three thingymajiggies for kids – so we try and get all four on – I think we are a walking OHS risk…

I guess I get uneasy as I like things orderly and in even numbers. Three isn’t even!! And these three are far from orderly. Hayden is likely the one who justifiably can say ‘I only ever got a third’!!

Ah the joys of motherhood eh??

Wouldn’t change even a third of my day for the world!!!

And tomorrow – Seaworld, where the rule of thirds will hit our wallet big time!!!!

How can you not laugh!!?